Summer 2012 spun fitfully to an end tonight. The kids, each of them a spinning gear, sucking the other into the mechanism. I think it is only safe that we put a bit of distance between them. It is time to get back to school.

It was marvelous though…this summer of 2012. I would not be surprised if when I rock in my old age home someday if this is the summer I return to. The jokes. The reckless independence; the sucking dependence…The tension between the two. The laughter, the long legs that still love to curl into me, the friendship forming between two of my favorite people.

I had my first garden at the ranch this year. The harvest certainly will not feed our family for any length of time, but it was never really the point anyways. I was eager for my kids to know where food came from, for them to eat raspberries from the vine again, to learn to love sun warmed tomatoes, to sit and shell peas. For that it worked. Every time I told the children I was going to the garden they would say “Wait mamma, I’m coming, let me get my gardening mittens”. And down the hill they would truck, basket in hand, and would try to find vegetables that were ready.

We all learned to really love Sam this summer. He ended up at the pound in June. He went for too many walks while we were in California and got into a bad habit. It is quite extraordinary though, he seems to have learned his lesson and has not left since we got him home. He puts up with a lot this dog. E has completely sat on him. O chases him around. He makes the face above and tries to sit on us all. He only gets upset when he can’t be with his people. Yup. He is officially our dog. 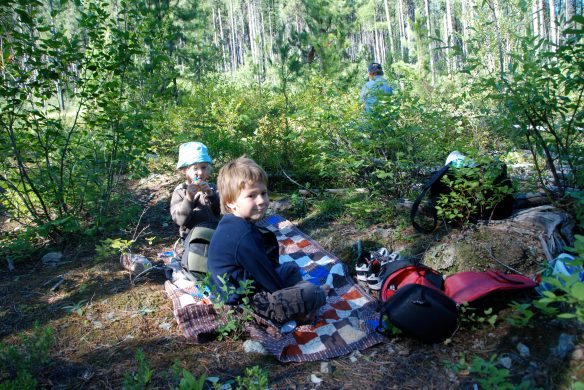 The kids went huckleberry picking for the first time this summer. Huckleberries are as much a part of my family heritage as anything. As a child I can remember finding out that other people ate them and I thought they were hedging on our territory. Please don’t ask me where this photo was taken. I will not tell you. I would give you a kidney if you needed one, but telling you about this huckleberry patch would result in excommunication from my family and also less huckleberry pie…two sacrifices I am not willing to make.

We swam a lot. We played in the sandbox a lot. We put the sprinkler under the trampoline EVERY DAY in July. We roadtripped to California. We went to Osoyoos once a week and had a great time with daddy. We play A LOT of princesses, cars, pirates, ponies, and “chase each other around the table whilst screaming”.

The funniest story of the summer was when O got angry with me, ran to his room, and slammed the door. Five minutes later the door opened and O asked “Mom, how do I spell NO MOMS ALLOWED?”. I stifled a laugh and then I told him, on account of the fact that it is like pulling teeth to get him to write anything. There was a sign on his door the rest of the day. The printing was really good my pride in that overwhelmed all other emotions 😉 The kids also graduated to new vocabulary hilarity this summer. I’ve a journal free of one liners that would make you laugh your face off.

Fall 2012 will hit like a fist tomorrow I am sure. Better get to sleep!

1 thought on “Country Chronicles: The Things I want to Remember Summer 2012”